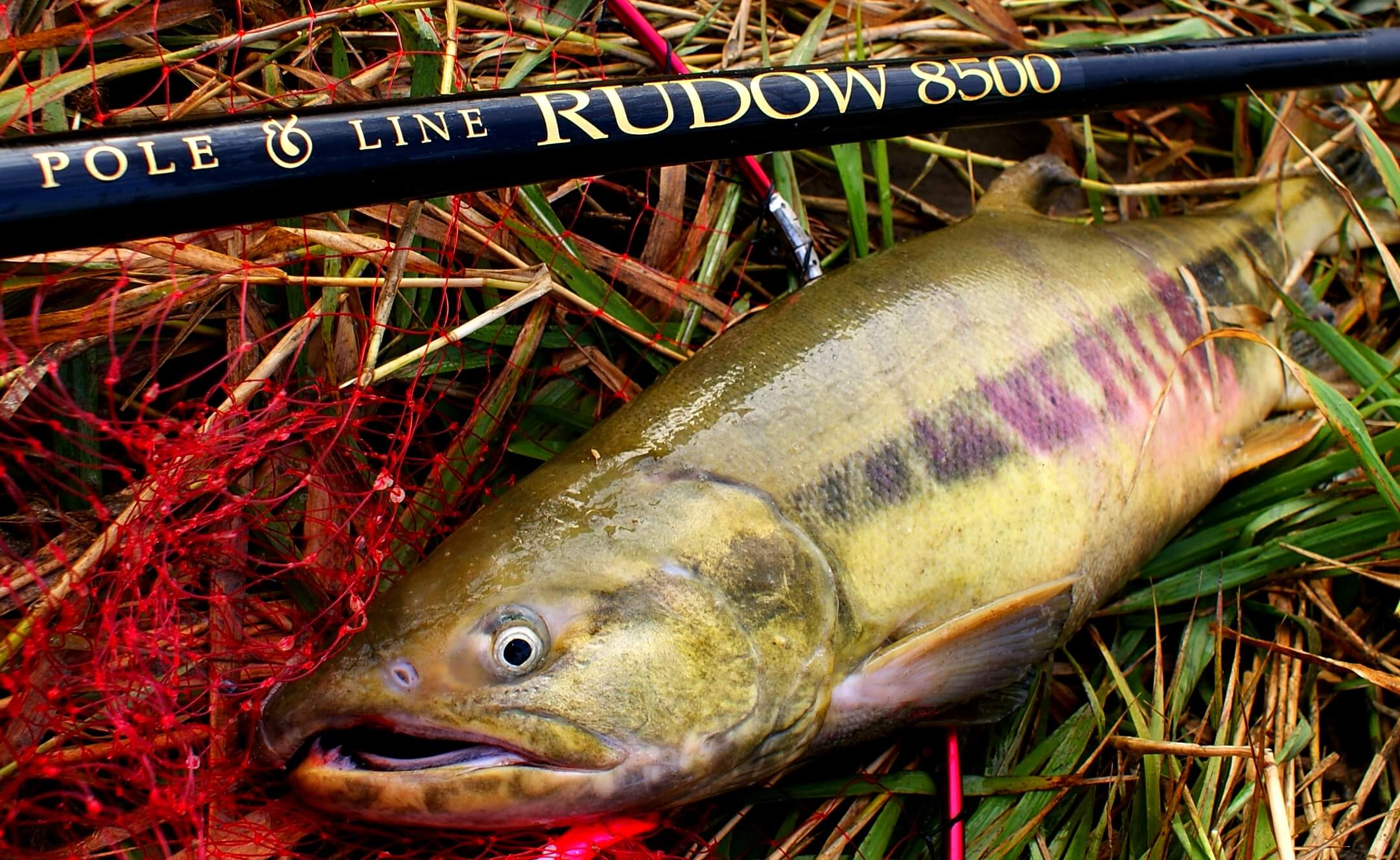 FIGHTING WITH SALMON
ON A LONG FIXED LINE ROD,RUDOW8500

In late October,the beginning of the best season for salmon in 2014,the river I went to with the new long fixed line rod for salmon,RUDOW8500 was somehow very muddy.However,I could see many salmon on the surface,the number was much larger than usual.This situation would promise good result,I thought.After finishing the registration at the reception,I hurried to the river but there were many anglers with fixed line rods at good points,so I decided to fish at a little downstream from them.Even here I could see some salmon rising.

(NOTE:Salmon fishing in Japan is allowed in only the limited period and places.Anglers have to pay relatively expensive fees and there are many rules.In most of rivers only male salmon are allowed to keep and female are collected by fishermen's cooperatives for artificial breeding.In the river I visited,male salmon must be kept and eaten.)

Let me introduce the tackle used in this session,the rod is POLE&LINE RUDOW8500,the line is 20lb nylon(I used this though this exceed the line rating of RUDOW,16lb,because the place where I stood in the session was a tetrapod and I did not want to move so much after hooking salmon.I believed the power of this rod and I'm sure this rod can be used with up to around 22lb.),the shots are those of Japanese,2 x "3B"(total weight is about 2g)on the point 50cm distant from the hook(OWNER SALMO No.15),and the number of markers is 4.I thought this tackle would be fine because in this field and time I had little possibility to hook very big one.As for bait,I used salted saury with imitation octopus skirt.Anyway,my fishing was started. 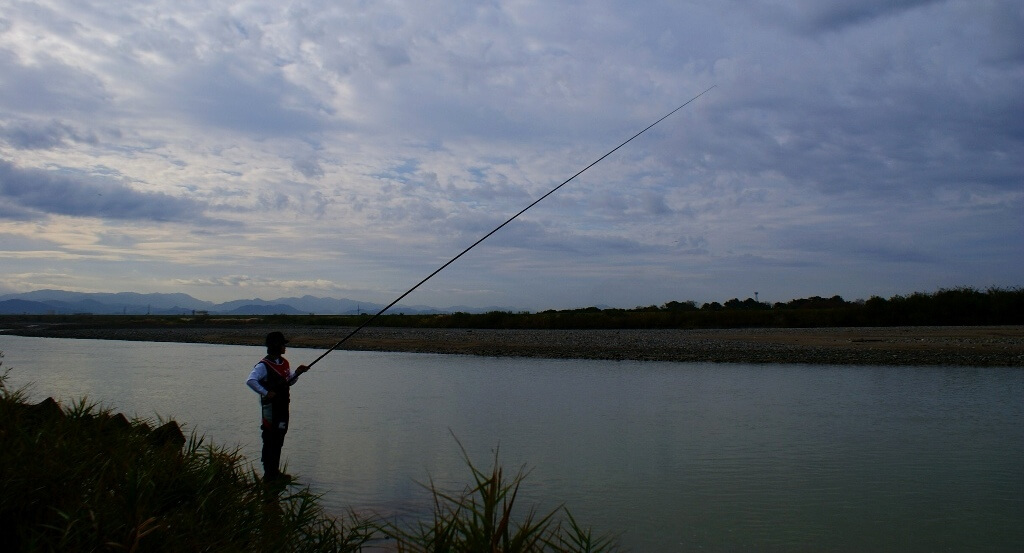 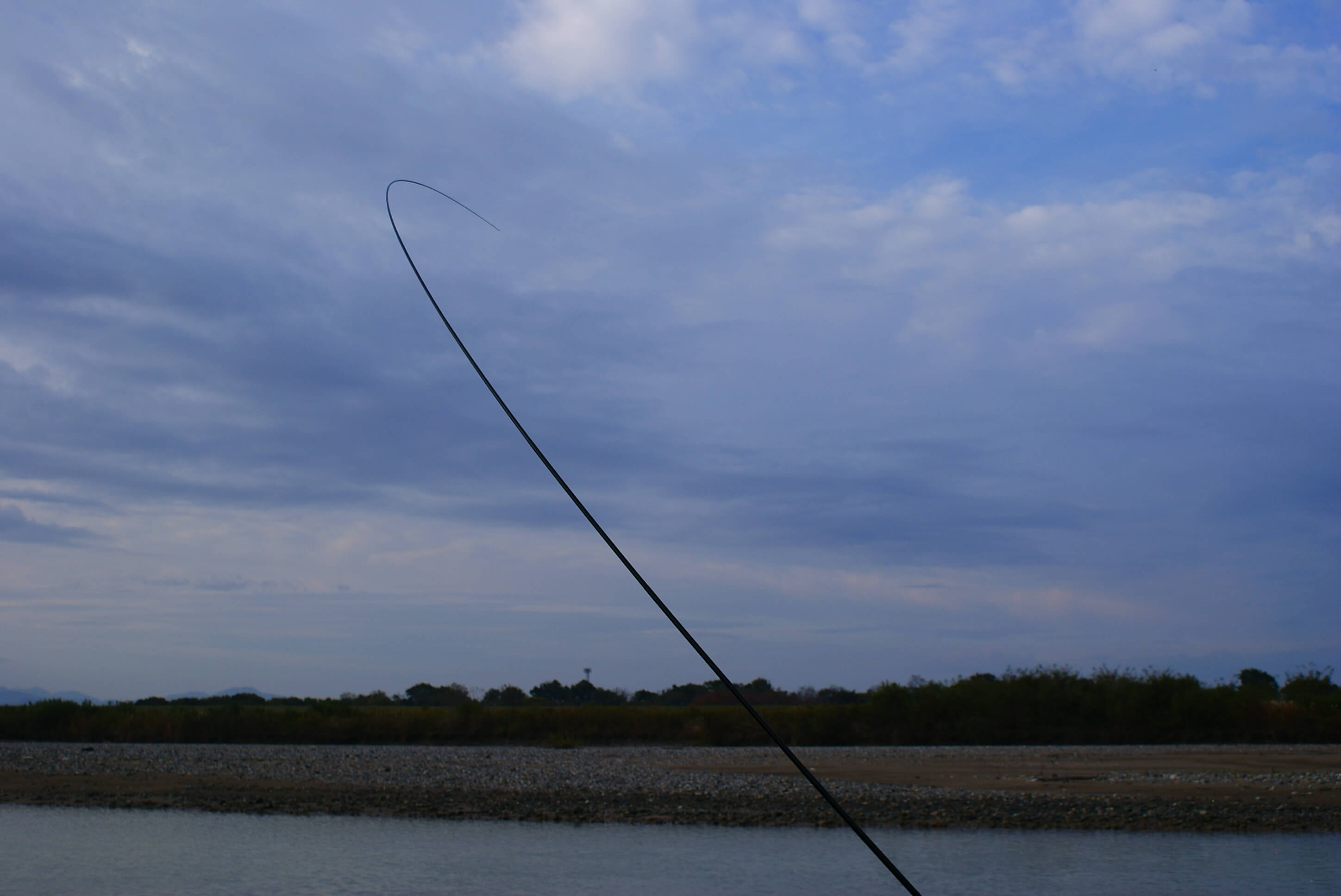 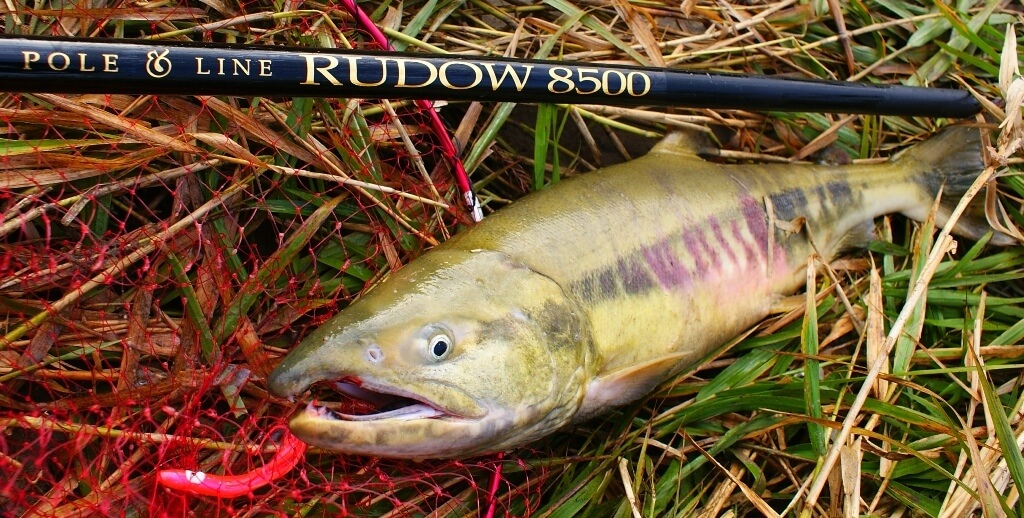 At the very beginning,a fixed line rod angler at upstream seemed to hook fish.In front of me salmon appeared on the surface again and again.At first I was drifting my rig at the bottom,which is basic method,but I thought the fish were in shallow range so I changed the drifting depth accordingly.This gave me the 1st attack of salmon.This fish was hooked out soon but I got confidence by getting the attack of fish anyway.Soon the marker showed slight change and I struck it strongly.The fish started running rapidly,bending my RUDOW8500 rod beautifully but there were still some excess power.The nice male salmon,74cm 4.5kg was landed after fighting for one or two minutes.

The place where I was fishing was a flat tetrapod and its backspace was little because there were a lot of plants and the ground was muddy.In this situation I could not use technique of stepping back to keep the rod angle moderate & safe and to avoid the damage of tip section.This means that I had to make the fish come only by the power of the rod and land the fish directly on the ground or catch it with net.The depth of the water was about 1 or 1.5m at the point I drifted my rig but it was deeper in front of the tetrapod where I stood on,so the fish ran down to the point sometimes.In such situation,pulling the fish strongly to the surface is very important because the tetrapod can break the line.In the session,every fight with fish made my line rubbed and I changed it after every use.

In this difficult situation,the powerful tip of RUDOW8500 helped me a lot by making the fish coming to my feet and preventing fish from going down to the deep point in front of me.Moreover its power of butt section is so strong that it was not bent much by medium sized salmon(70cm to 75cm).

It was my first visit to this river in Hokuriku,and I was surprised at the very muddy water and ground.It seemed that the bottom of the river was also so muddy,because I could not feel the shot of my rig bumping the bottom.This made it difficult for me to know the drift range of my rig but thanks to this muddy bottom there were no snag.
I had thought salmon disliked such muddy water but actually I could see many salmon.About 5 minutes after I caught my 1st salmon,I felt something like snag at the end of the drift,so I struck gently.Soon the fish started running,but it was hooked out during the fight.The point I fished was near the sea so the salmon were powerful though the size were not so large.

After the fight I got no bite for a while.Changing the depth and appealing the bait made no sense.I saw a mullet swimming in front of me.It was after some more time that I got the next bite.Just before the end of the drift I noticed the markers were slightly moving.At that moment the fish did not bite completely but I thought the fish was touching my bait so I drifted my rig carefully to the very limit of the length of rod and line.Then the fish bit it finally.The fight was harder than that of the 1st fish,but there were still some excess power.After around 2 minutes the fish gave up at my feet,I landed it by catching the line directly because of the thick 20lb line.With this rod and line,such rough fight is no problem.The fish got full of mud but was beautiful male salmon after washed away.The size was 75cm,4.5kg. 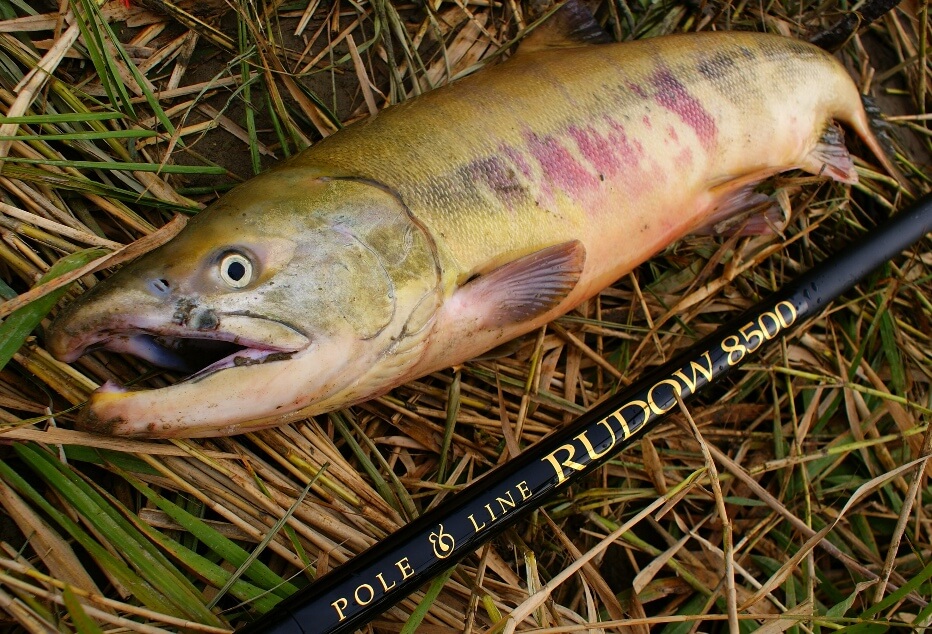 The 2nd and the largest fish of this session,75cm 4.5kg.The butt had still some excess power even in the fight with this.

I did some appealing my rig but it was always during very slow drift for the bite to come,which is basic method for salmon.The bite of the 3rd fish was also like snag.This fish showed really hard fight.When I saw the face of this on the surface,I thought this was female and not so large,but the fight was too hard against the expectation.This fish didn't run straightly but a real hard fighter.I had to prevent it from going down to the depth in front of my tetrapod,and after it the fish was bending my rod well by running toward the opposite bank.

The landed fish was so beautiful,silver colored one with sea lice.It was obvious that this fish had come from the sea just now.I could not know this was male or female,so asked a staff of fishermen's cooperative and he told me that this was male,very nice and good for eating.The size was small,70cm,3.2kg but the fight was the hardest.The fish that has just come from the sea is very powerful.

In this session,I was puzzled at the very muddy water but I could catch some salmon.There were also some fish that were hooked out and I could not land.The RUDOW8500 could not be bent to its limit by monster salmon,but I was satisfied with the nice fight of salmon near the sea.All male salmon were kept and eaten thankfully.

Now RUDOW8500 is discontinued BUT our new, much stronger model AIR GOLIATH8400 is AVAILABLE!! 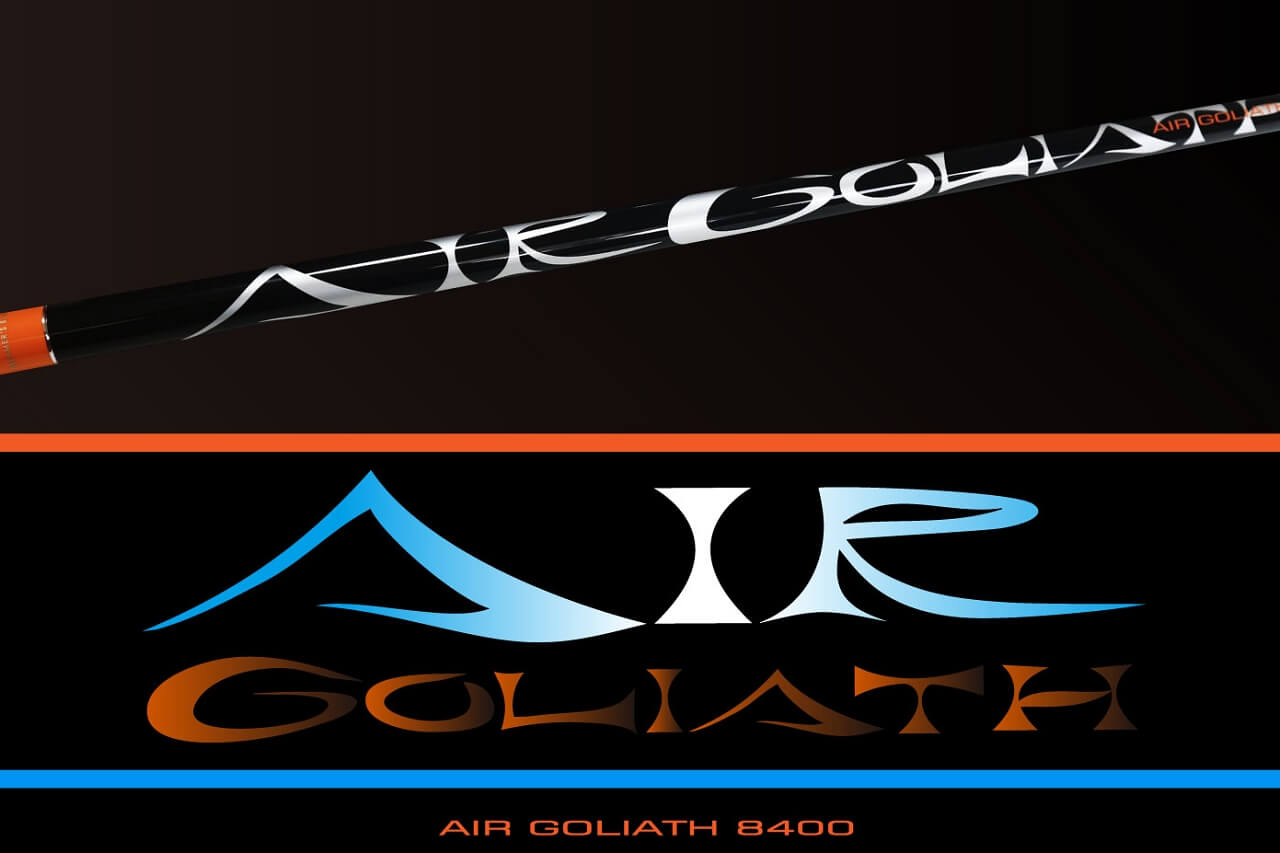